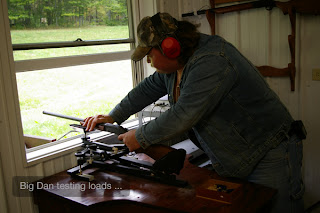 SHOT DESIGN
The Gauge of a shotgun is a unit of measurement used to express the diameter of the barrel. The gauge of the inside diameter of a barrel corresponds with the number of identical solid spheres that can be made from a pound of lead.
From the definition above, it is not difficult to understand how ingrained lead is to the engineering of shotgun. William Watts of England is credited with the development of modern shot with the erection of the first shot towner in 1769. Lead's first use as a projectile no doubt has to occur sometime before that (any historian out there?). It is obvious that current lead shot loading data must have been derived from the wealth of an accumulation of some 300 year's worth of empirical data.
Shots which deviate significantly in density and hardness from that of lead such as steel, bismuth or other variety of tungsten alloys must have gone through a lot of try-and-error tinkering in the loading data, amid special wads and buffering, etc.  so to retrofit in the lead-centric shotgun design.
When Big Dan first contacted me sometime in March 2003 to inquire about the feasibility of manufacturing of a non-toxic shot, I was so pleasantly surprised in how we thought in unison. First of all, we both agreed that non-toxic alternatives such as armor piercing heavy pellets were neither necessary nor efficient, not to mention their harshness to the gun barrels. In fact, it's simply a waste of energy whenever a pellet pierces through a quarry. Other alternatives such as steel and bismuth shot just don't cut it. Thus, the idea of reinventing lead was borne.
With all the virtues of lead (engineering speaking), it does have one major flaw, other than its toxicity: it's just too soft. When a shell is fired, the gas pressure from the explosion pushes the pellets forward. The rear end ones collide with the front ones and deform. These deformed pellets, upon air resistance in the flight, will scatter around and interfere the shot pattern. For high end lead shot, antimony is usually added to harden the lead, which, to some extend, does correct the flaw a bit.
While at it seeking a non-toxic solution, we thought we might as well go all the way to make a 'perfect' shot that does not deform under the gas pressure, yet it must not be too hard to damage a gun barrel or be armor piercing. Upon impact, we do want the shot to deform and to deliver maximum energy to the quarry according to the principle of terminal ballistic. It must be malleable and be as dense as lead as possible. I liken this engineering feat of finding such a sweet spot of density/hardness to that of reinventing lead.
Since the product introduction, feedbacks from our customers have all been positive and reaffirming. ECOTUNGSTEN™ Nice Shot™ has indeed achieved its design goal as a worthy non-toxic successor of lead. We couldn't be happier. Kudos also go to our engineers who have done such a marvelous job in their relentless pursuit of perfection. It's been more than four years in the making.
RELOAD STRATEGY

If all you are given is a bunch of "cheap" shots that pattern very poorly, chances are you would instinctively load more shot in a shell to improve your odds of hitting a target. Quite plausibly, this natural instinct was what invented shot gun in the first place back in the olden days of hand cannons.

However, overloading shells with shot is not an effective strategy for the following reasons:
With Nice Shot, which already patterns so well, the loading strategy obviously should not be that of improving the hitting odds. Rather, it should be that of the economy of shot. i.e. What is the minimum number of pellets to load such that each pellet will carry maximum energy to the quarry?
Since Nice Shot has a density very close to that of lead, we can start off by leveraging the time honored lead loading data. From there, we can incrementally lower the number of pellets per load and study the patterns. This forum is open to all Nice Shot users to share their reloading experiences. We cordially invite you to participate and benefit the community. We are particularly fortunate to have Big Dan, a hunter, inventor and President of Nice Shot, Inc. as our moderator.
Finally, while we are working hard to lower the cost of production and pass the savings back to you, we are pretty much powerless confronting the global energy and material price surges. Until such surges subside, minimizing the number of pellets per load will certainly help stretch the dollar a bit --  a nice little bonus for loading it right.
Posted by ECOTUNGSTEN at 2:28 PM 106 comments: